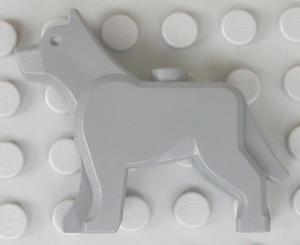 I was up in NJ for work a few weeks ago and stopped by the LEGO Store at Bridgewater Commons which is about two miles from our NJ office.? Unlike my recent visit to the LEGO Store at Woodfield Mall in Chicago, the Bridgewater store had quite a few interesting Pick-a-Brick elements to choose from.? I ended up buying a single large cup, since I am not building much right now, it is hard to justify buying a lot.? The most interesting element was the dog (in the new brown color) which first appeared in the Harry Potter sets.? Since you can’t have too many animals I picked up a bunch of them.? I also picked up some black fences, yellow airplane windows, and magenta 1×1 bricks.? I am a sucker for some of the odd colors so finding the magenta 1×1 bricks was a surprise.? I had collected some magenta bricks several years ago whent he bonus tubs and boxes were on the market but the element selection was odd and building without 1×1 bricks can be a challenge.? Now that I have some, I will have to do something with that pile of magenta bricks!

This entry was posted in LEGO, Shopping. Bookmark the permalink.