As I continue to dig through stuff, I try to put together where it came from.  A couple days ago I was reassembling a 6562 Gas Stop Shop

and I was trying to figure out why I had so many duplicate parts.  I knew I had one because I have the box and instructions but wasn’t sure where I picked up a second one.  After getting the first one complete, I got the second one as complete as I could.  It is all there except for the tanker truck.

It turns out this incomplete set came from an eBay lot I won back in 2001.  It was a pretty good haul of 9v Train stuff including parts from a 4564 Freight Rail Runner and a 4554 Metrostation.  There were quite a few other goodies in the box but in the back of the third gallery image you can see the partial 6562 Gas Stop Shop.  Ah-ha – so that is where is came from!  In the image you can also see that it is missing the tanker truck too.

At the time it was pretty common to post such a “find” on LUGNET as a “Find of the Day” or FOTD.  Here is the link to my original FOTD post.  $100 bucks for all of that stuff – not bad. 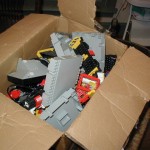 The box I received from an eBay auction. 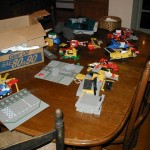 Trying to figure out what all was in the box. 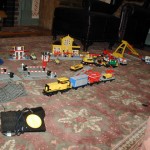 Everything put together that I could identify.

This entry was posted in Caught My Eye, Shopping, Sorting, Storage, Trains and tagged eBay, FOTD, Shopping. Bookmark the permalink.