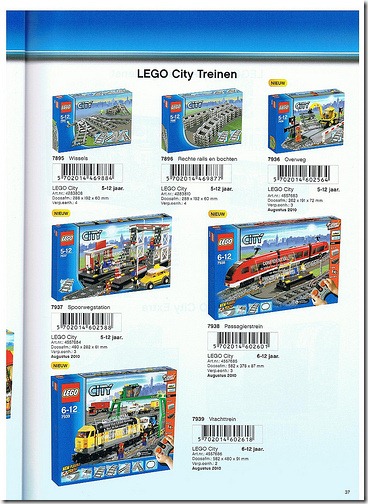 You can read a bit more about 2010 LEGO Trains in this article on BrickSet.  A couple of initial thoughts:

They are interesting but I don’t see myself buying any of them unless they are really good deal.  I recently sold four trains that I still has NISB to help me buy a camera lens I wanted.  So for me this is both good news and bad news.  Good news that Trains continue on, bad news that they still don’t believe that there is a market for individual cars.  One of these days I need to dig up the White Paper on marketing LEGO Trains that I wrote when I worked on the Hobby Train project and post it.  When I originally wrote it (about five years ago) I was asked not to post it on the web but that was so long ago, it probably doesn’t matter any more.  I went back and read it about six months ago and I think it is as accurate today as when I first wrote it on a flight back from Munich.